It would certainly be an understatement to say that Sarah Helen Whitman’s father, Nicholas Power, led an interesting and controversial life. He was born to parents Captain Nicholas and Rebecca Cory Power on September 15, 1771. He married Anna Marsh in 1798 and made a living as a merchant until 1812 when the war with the British put him out of business. In 1813, Nicholas Power departed Rhode Island for North Carolina, where he would begin a seafaring life, venturing to the West Indies. It was at this point his vessel was caught by a British fleet and he was held a prisoner of war for nearly two years. Upon his release in 1815, he decided to continue his life at sea without ever notifying his family of his survival. He was presumed dead and Anna Marsh began the stages of mourning and adorning a widow’s bonnet. She purchased the house at 76 Benefit Street (now 88 Benefit Street) to make a home for herself and her three daughters. In 1832, nearly nineteen years after his departure from home, Nicholas Power returned to his “widow” and his two daughters (his oldest, Rebecca, having died during his absence in 1825) in an attempt to resume his family life. Anna did not receive him well, removing her widow’s bonnet and promptly beating Nicholas with it until he was forced out of the house. Anna had nothing to do with him after this and began a fervent distrust of men all together. Their youngest daughter, Susan Anna, was mentally ill, and never knew her father (having been born shortly after his departure in 1813) so his return surely affected her already fragile state of mind. She expressed her impression of the ordeal by writing this little couplet:

Mr. Nicholas Power left home in a sailing vessel bound
for St. Kitts,
When he returned, he frightened his family out of their
wits.

Nicholas Power took residence in a Providence hotel, living the rest of his days as an outcasted family deserter. In 1842, he was imprisoned once again after taking part in the Dorr Rebellion (a Rhode Island civil-war in favor of allowing men without land to vote. The legislation in Rhode Island at the time was that a man had to be white and own at least $134 in property in order to vote). He served his sentence, was released, and died on April 28, 1844. He was buried next to his parents at the North Burial Ground in the Power family lot. 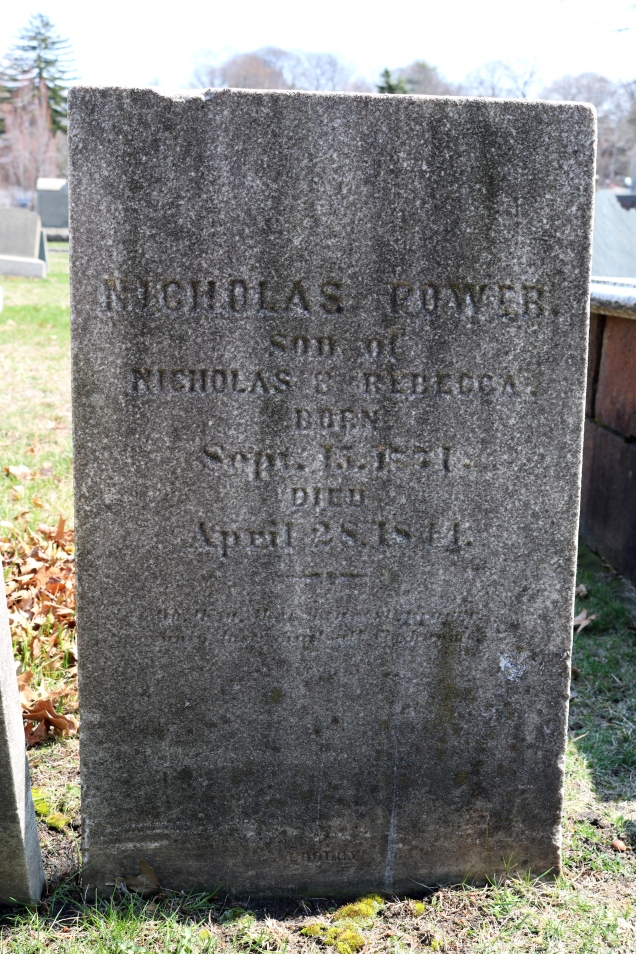 Note for navigating the menu: Sites and people marked with an asterisk (*) have a direct association with Poe.