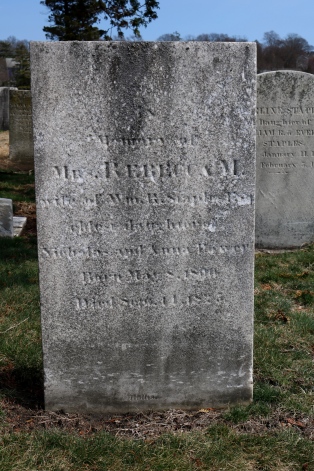 Grave of Rebecca Power Staples’ husband. Located in the North Burial Ground.
Rebecca Power was the first child born to Nicholas and Anna Power in September of 1800. She would be the oldest sister of Sarah Helen and Susan Anna Power. In 1821, she married William Staples and moved into a home on Benefit Street to start a family. In 1822, she gave birth to a daughter, Rebecca Staples, but unfortunately the child died only two short years later in 1824. William and Rebecca tried again, having another child that same year. A son was born and appropriately named William Staples Jr. Sadly, on September 14, 1825 Rebecca Power died from an unknown illness, and her last surviving child, William Jr., died shortly after in 1829. It’s very likely that the affliction or disease that took Rebecca was also responsible for taking her children. William Staples Sr. did not waste any time moving on with a new family. He married Evelina Eaton the same year Rebecca died, and they had their first of eight children together in 1828. Many of these children, including Rebecca and William Jr., are buried together in the same plot with their parents, William Staples Sr., Rebecca Power Staples, and Evelina Eaton Staples at The North Burial Ground.