One morning in September of 1848 while in the Providence Athenaeum, Sarah Helen Whitman had asked Poe if he had read “Ulalume,” an unsigned contribution to “The American Review.” Without saying a word, Poe grabbed a bound volume off the shelf in the alcove where they were sitting and opened up to the poem. He then took a pencil and signed his name at the bottom of the page. The volume remained in circulation on the shelves of the Athenaeum for over 20 years, until Sarah Helen went back to secure it and put it into good hands.

“‘Ulalume’ was published without signature & an anonymous copy had floated to me in some newspaper. I was strangely impressed with its weird imagery & vainly questioned everybody likely to have heard of it. One morning, being with Poe at the Athenaeum, I asked him if he had ever seen the poem & could tell me who wrote it. To my infinite surprise, he told me that he himself was the author. Turning to a bound volume of the Review which was in the alcove where we were sitting, he wrote his name at the bottom, and I saw it again yesterday, after an interval of more than 24 years.”

That same volume now resides in the Athenaeum’s Special Collection and can be viewed by appointment. Below are some photos I took during my time with the artifact: 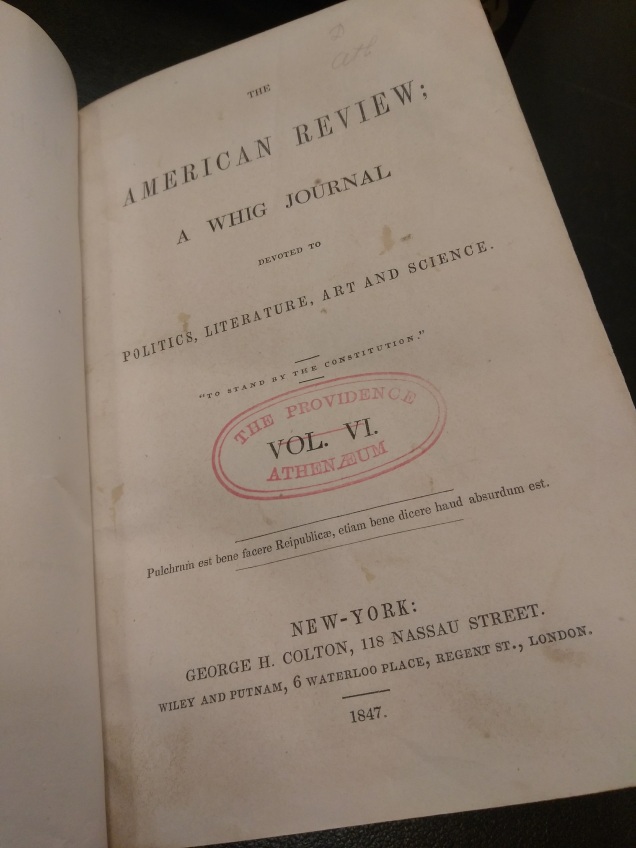